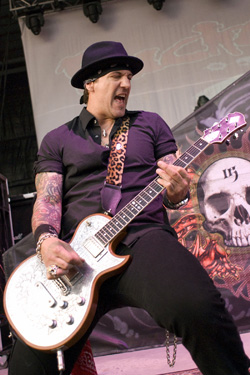 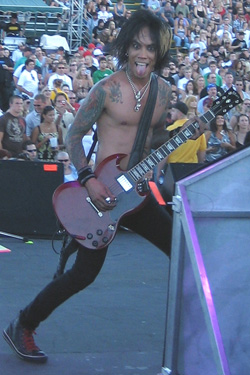 "Doooood!  They sound amazing!!  Noone can touch this sheeit!  Viva WAGNER!!!!  Absolutely my favorite pickups for all my guitars."

"There are no other pickups!! This is THE sound!"

All loaded in main guitars.

"The level of expression Wagner's brought to my playing is something I'll be forever grateful for.  Finally a pick up that captures all the nuance of

my hands, the woods of my guitars and the subtleties of my amplifiers.  Organic, three dimensional, honest and warm.  These pickups made me a better player, no question."

"Fat, open, organic, warm and expressive with a cool sass and attitude that I've never had before!

I LOVE these pickups!"

The guitar sounds as it should now, ballsy and clear, and a ton of the wood character pops through!"

"After about 30 seconds of playing Jim's Ironmans I was blown away. Had to have 'em.  These things ROCK!  I play a lot of styles and the great thing is how versatile these pickups are.  They'll shred big time with plenty of crunch, but they sound warm and crystal clear using them clean.  Plug 'em into your Marshall and see what happens."

"These pickups have more tone and response than anything I've ever played.  From great balls of fire to clean rhythm, they help to catch the expression of the music I'm tryin to make.  Wonderful sustain and colors of tone for any kind of playing.  Congratulations Jim.......you've done it!"

"Hey Jim, Thanks for working so hard on your quest for better tones...THE BEST! Wagner pickups need to be in every Les Paul made! I told that to my Gibson rep he said has not heard of Jim Wagner??? I SAID-- YOU WILL-- YOU WILL.  If you want the real sound of grinding power and meaty bottom end, use any of these pick-ups, I really dig the DarkBursts, but they all ROCK!"

"Made my LP sound TWICE as good as it used to!   You also solved my original predicament: the muddiness of the neck & the brightness of the bridge.  I played the guitar in a session today & the producer kept suggesting to use that guitar all day.  It's hard to argue with great sounds. All I know is this guitar has a life that I've never experienced in a humbucker guitar. Congratulations, people go through life never being good at anything.  You may be good at other things, but I KNOW that you're good at this."

HUGE part of my sound.  If you want the absolute best look no further!"

FOUNDER OF THE LPF

"I'm thrilled with the tone and responsiveness of my Wagner pickups.   Jim winds very musical sounding pickups since he is a guitar player himself, clarity and articulation without harshness - full, rich, woody tone that really is a joy to behold. Also, Jim is a great guy and always very helpful!"

"I stay with the BetSet.  I use it in my main guitar which is my

2007 Historic R9.  I even recently sold my PAF because it was

a bit tame in comparsion.  I couldn’t be more satisfied."

for his tone.  I hadn't played a LP style guitar in years and realized that I was missing a big piece of the puzzle.  Jim's guitars and pickups are killer!"

"I love my Darkburst.  Awesome tone and very articulate pickup, dynamics are awesome.   Jim is by far one of the best pickup winders around, period."

"Wagner's SR set in my strat are badass!  These musukkas are sweet enough to "woman-tone" and "woody-up" my tone and bring every thing I'm saying with my hands out front and personal.  Pedals or no pedals, the "SR-331" set is where it's at."

of pickups I've ever heard for melodic metal and lead guitar!
If you haven't taken the Wagner plunge yet, do it and never look back!"

"I love Jim's Crossroad pickups! They are my favorite Wagner's.....

They have the clarity and character of great PAFs.

"Wagner pickups are the best on the planet."

"Owning a studio in the heart of Los Angeles gives me access to the best of everything in the world of guitar and audio, Wagner's are the best of the best in boutique pickups.

IronMan pickups in them.  All of them have amazing detail and articulation without being sterile.

No guitar has made it on to more records then my 2006 Gibson Les Paul Standard with the American Steele set.

That guitar rules the roost and the biggest reason is the Wagner Godwood in the bridge.  The Godwood is the ultimate Les Paul pickup, it drive my Marshalls, Boogies, Fenders and Diezels perfectly.  Oh yeah it doesn't hurt that Jim's a good guy.  Oh also, want to have some real fun, throw

a Fillmore in the neck! Incredible!"

"Thanks Again very much for the BetSet pickups.

All the tones are just fab, and the middle-position-both-pickups-on NAILS that sweet musical tone that came from that Betts/Toler guitar. ....really amazing."

"The pups were howlin'!  They really do remind me of PAF's

I've played on, warm, full, rich, even sparkly when I want.

"I've been with Wagner from the beginning. They ROCK all the way!"

"Your pickups have been a critical part in my pursuit of that elusive vintage Fender tone. I've tried other boutique pickups, while they would shine in some areas they lacked in others.

Your SR pickups have that perfect balance of depth, woodiness and chime. They also sound REALLY great through a Marshall.

I can't wait to acquire a set of your killer humbuckers for my LP."

"My jaw hit the floor.  I played for over 3 hours with

"Every guitar player has that tone in their head that they feel will define them. These Wagner Fillmores gave me that tone.  This is simply the best sounding, hardest working, humbucker set up I have ever strapped on. Thank you Jim Wagner!!!!!!!!!!!!"

"WOW...The tones that come out of the amp are stunning, brought tones

out of the wood only a quality pickup can do."

"Take one of the finest men on the planet, ask him to hand wind the greatest pickup for an electric guitar with all of the passion and love for music anyone could ever know, and you have got yourself a Wagner pickup.

Nothing else even compares."

"Wagner pickups are the biggest, fattest sounding Pups on the market.  Wagner pups are all over my new solo album (Slow Motion Hurricane), and will be the main tone on all of my future releases.

Do yourself a favor - slap a set of Wagner's in your axe."

"There was a time when I wished to play something that would sound like what I have listened all my life...but then too much things got me confused. This led me think deeply about my own style and my own sound. This made me filter out everything except my own instinct and the way I feel it.......And Brother Jim and Wagner PICKUPS helped me out in doing so amazingly."

"I have Jim's pickups in every guitar I own.  They are that righteous my friend."

"Bro. Jim is bad to the bone, Lord have mercy, he has got that tone!"

"I have played hundreds of guitars and can honestly say Wagner offers the tone that a good guitarist needs to be great."

"I have the Godwood/Darkburst set in three guitars now and everyone of them sounds fantastic.  Open and organic but still tight and crunchy when I need them to be.  The neck pickup roll off is to die for, best lead tone I have ever had for speed picking, arpeggios and slow soulful bends."

"The only way I could get THAT sound was with my guitar that's locked up in the Hall of Fame.    Until now....."